Currently family owned she has been used as a charter boat and is used to visiting historic marine events and festivals. She has also been used in a number of film and TV show's including BBC 1's Poldark.

Designed by Holmes and built in Raa shipyard in Sweden in 1914, her home port was Fortuna, Sweden from where she operated as a coastal trader with cargo of ceramic pots and stoneware delivering for a famous Swedish company called Hoganas.

Her first engine was fitted on Feb 1st 1922, a 20 h.k.r saffle. She continued carrying cargo and is said to have travelled as far as France and Ireland in the Second World War.

In 1941 she was sold to a company in Hampsburgsund and again continued her work as a Baltic Trading ship.

She then lay idle until 1964 when she was rescued by the Bjork family who restored and re-registered her as a private vessel in Denmark.

During a winter refit in 1984 the interior was burnt when an oil stove caught the wooden raft alight. Following the fire the Bjork family set the cabins as they are today.

She changed owners in 1992 when she was bought by Anders and Jan Hird. The rig was restored to it's original gaff. She was used by the Hird family for charter and educational trips around the Swedish coast until October 2004. During this time she also played host to five weddings onboard.

In October 2004 her new owners sailed her from Sweden to Cornwall which is where she currently lies.

If you would like to see more details on her listing, or arrange a viewing, please contact Boatshed broker Chris. 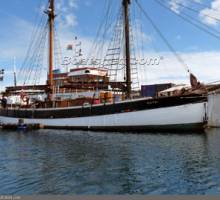 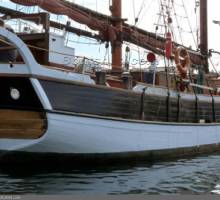 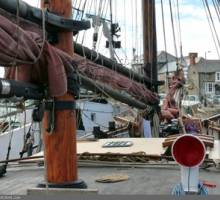